Your credit union’s story began on February 25, 1948 when Federal Charter #5648 was granted to the first 11 members of Pasadena School FCU. The following month, on March 11, the first five Board Members, John Peachey, Ernesteen Milstead, Carroll Teague, Mrs. Haydon Sypert and Marjorie Reeder, conducted the credit union’s first Board Meeting. The Directors set the hours as 12:00 pm to 5:00 pm on the 2nd and 3rd working days following paydays to accept deposits and book loans. 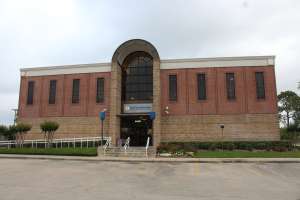 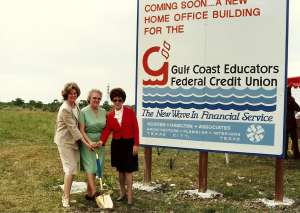 1980s – The 80’s brought sweeping changes and explosive growth to the credit union. One of the biggest changes was the name. In February of 1980, your credit union’s changed to Gulf Coast Educators Federal Credit Union, which more accurately described the credit union’s membership. In 1982, the credit union added checking accounts, IRA’s, MasterCards, ATMs, and Direct Deposit to the list of services it provided members. This along with the League City office opening in 1983 fueled the credit union’s explosive growth. By the end of 1985, credit union assets grew to over $44 million. In May 1986, the Pasadena office relocated to its present location which allowed for Drive-In lanes, safe deposit boxes, and an on-premise ATM. The credit union ended the 80’s with over $64 million in assets and 18,000 members. 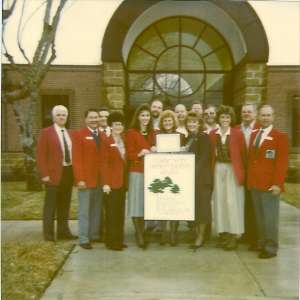 1990s – The 90’s represents the credit union’s fastest and probably most intriguing growth period. In 1990, the credit union added Santa Fe ISD and Pearland ISD and built the current League City office with Drive-In lanes, safe deposit boxes, and an on-premise ATM. During the 90’s, the credit union added some private schools, Texas Chiropractic College, and the San Jacinto College District. In January 1995, the 10 lane Drive-In was opened at the Pasadena Office. By the end of 1996, the credit union had grown to over $109 million in assets.

2000s – The credit union entered the year 2000 with over 28,000 members and $135 million in assets. The credit union continued to be a leader in its field and highly rated by NCUA. With the continued guidance of the Board of Directors and the proven leadership of the Management team, the credit union pledged continue to offer innovative products and exceptional service to the membership.

In 2008, the credit union remained a strong financial institution even with the turmoil surrounding the national economy. The credit union’s conservative fiscal policies kept the credit union in strong position to help our members even during the tough economic times. 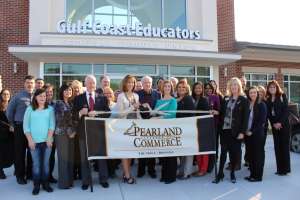 2010s – By November 2013, the credit union grew to a half billion dollar financial institution. Gulf Coast Educators FCU introduced many new technologies, such as person to person transfers, online account opening, and remote deposit capture. The growth continued through out 2014, and a fourth branch was completed in west Pearland. The credit union also successfully petitioned NCUA to expand our charter to include education employees of Brazoria, Chambers, Fort Bend, Galveston, Harris, Liberty, Montgomery & Waller Counties, Texas.

In August 2016, the credit union introduced new Interactive Teller Machines (ITMs) to the Pasadena and East Pearland branches. The new innovative technology allowed for faster service and convenience for our members, and job growth for our employees. In December 2017, the credit union opened its fifth branch in the Summerwood area, followed by its sixth branch in January 2019 in Baytown.

Gulf Coast Educators FCU is growing at an incredible rate, and closed the 2019 year at $860 million in assets, all thanks to our loyal member-owners.

The Flames of Knowledge

In 2012, the credit union made the flames of knowledge the focus of our new logo. The flames have appeared in the credit union’s logo since the 1980’s and represent our dedication to education.

Our Service Mission is “Building lifelong relationships, one member at a time.” This mission supports the promises we make to our members and our goal of being a premier financial services provider for all our members.

OUR PROMISE TO YOU